Frequently adopting a historical narrative in exhibitions about The Somme, The Russian Revolution , Waterloo and Auschwitz, working in mixed media , wax and 3D, Ingrid’s work this year turns, in addition, to issues surrounding us in the “now”. The wonders and mysteries before us get swallowed up by the ceaseless conversations of the mind. Although “presence” is a popular concept in this crazy, digitally obsessed world we live in, hardly any of us actually manage to do it. We’re too busy worrying about why the soup is too cold. Ingrid’s process is collage, large scale exploratory ink drawings leading to the final outcome in oil paint.

Arising from a deep sense of personal loss of her European identity and subsequent feelings of isolation and outsiderness, the “human dysfunction”series was created over one year. Responding to the desperate uncertain shifting sands of Brexit Britain these works respond to social issues affecting society now. In old age, how do we fit into a world as it evolves to exclude analogue values? Massive increase in mental heath issues triggered by technology and a lack of human contact. Where is the place for spirituality in all this chaos?

Ingrid Barber is an artist and a maker.   A narrative thread informs her work and a fascination with memory is at the heart of her practice.  Her memory journey began on her art foundation course with an installation made from rabbit bones, oil paintings, cigar boxes, feathers and wax.

She completed her degree at Kingston University with a year-long memory project, “If These Walls Could Speak” about a derelict house, working with found objects, mixed media and wax casting, which is  now with a private collector. Commissions for bespoke memory pieces followed and in 2015, “The Other Side of the Hill,” a contemporary encaustic large scale artwork, celebrating the anniversary of the Battle of Waterloo was exhibited at the Fine Art Society in London. Ingrid also travelled to Germany to represent Sutton at the Minden Arts Festival and in 2016 curated and made work for a group exhibition to commemorate the Battle of the Somme at ArtMoorhouse London and Honeywood in Surrey.  In  July 2018 working with art collective Acid Drop Copse, Vout-O-Reenee’s Stash Gallery in Tower Bridge staged an exhibition and events progamme to mark the anniversary of the death of the Romanov family. In 2019 Ingrid moved to a studio at Oaks Park in Carshalton Surrey, where a new body of work “The Human Dysfunction series” emerged.  The second piece in the series, “Cheese on the door, where’s my stew”  was accepted by the Mall Gallery for the Royal Society of British Artists annual exhibition in July 2019.  Lockdown has seen a new body of work which was regularly featured in the top Instagram hits of the Grayson Perry Art Club.

If you are interested in any of the work featured here or in a commission please email me for prices and further information . Barber.ingrid@gmail.com or call 07702619467 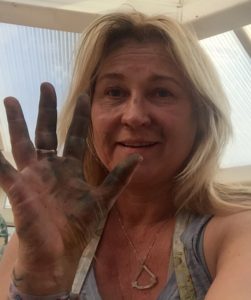